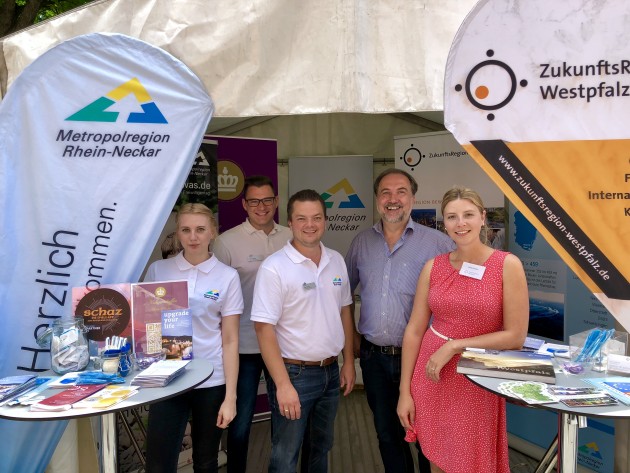 The cities and regions of the state present themselves at the annual Rheinland-Pfalz-Tag. In recent years, West Palatinate communities were hosts of the state festival twice: the city of Pirmasens in 2013 (21-23 June 2013) and the district administration of Ramstein-Miesenbach in 2015 (26-28 June 2015).

At both event weekends, ZRW was present with its own stand and informed interested visitors about its own initiatives and the West Palatinate region. In the year 2013, the Rhine-Neckar metropolis region could be involved in setting up a stage programme at the Rhineland-Palatinate Day in Ramstein. Together with ZRW member radio station RPR1., we made it possible for three young West Palatinate bands, No Time to Expect, The Beautiful Dead, and Straight Curve, to perform in front of a large audience. In 2018 in Worms and in 2019 in Annweiler, the Rhine-Neckar metropolis region was once again the partner of the exhibition stand.

Short video clips can give you an impression of our information stand and the bands' performances.

Please activate our social media plugin, if you like to follow us on Facebook. By using our plugin you agree, that data will be transmitted to the operators of social networks. For further information please read our Declaration of data protection.
› Follow us on Facebook
activate plugin
permanent activation